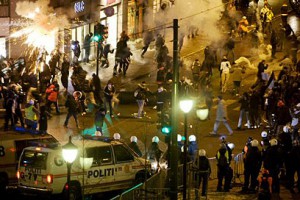 Ok, maybe not yet, but I’ve finished my first lesson, and know such useful phrases as:

Jeg is really strange to me.  It’s sort of pronounced Yaii (it’s hard to come up with an English spelling that shows how it’s pronounced since it’s really not a sound combination we use).

Hopefully we’ll start learning more useful information.  There are a couple of phrases that could be quite useful to know, such as:

“Everybody run!  Velociraptors are in the building!”
“Please hide me, men with guns are chasing me!”

Ok, maybe situations that call for those phrases don’t come up often, but if they did, wouldn’t you want to know how to say them? 🙂

Every year on December 11, the Nobel Peace Prize committee hosts a concert to celebrate the winner.  This year the winner was Martti Ahtisaari, the former president of Finland, and apparently a skilled peace negotiator (he’s brokered peace agreements on three continents).

I was lucky enough to get a ticket to the concert.  It may not have been the best seat possible, but it seems to have been one of the best seats you could get by buying the ticket online.  I found much of the concert to be quite good, although there were a few acts I was not a big fan of.

From Swedish pop artist Robyn, to Jason Mraz, to Finnish violinist Elina Vähälä (playing a Stradivarius, no less), it was a concert with almost every type of music.  I felt Mraz, Vähälä, and Il Devo were the highlights of the evening, but a coworker who also went was a big fan of Robyn’s performance.  Sean Kuti’s African rythms and Dierks Bentley’s American country music were not that great, but then again, those aren’t my types of music.

If you have the opportunity to attend the concert in the future, I would definitely recommend it.  Don’t get me wrong, it’s not always the greatest music (this year Diana Ross was the headliner, and I just wasn’t impressed by her performance at all), but at the same time, how often do you get to go to a concert attended by a Nobel Peace Prize recipient, not to mention Norwegian royalty?

Oh, by the way, people often ask why Alfred Nobel, a Swede, decreed that the Peace Prize should be chosen by a committee appointed by the Norwegian government and presented in Oslo, rather than in Stockholm like the other prizes.  It’s not a question anyone can answer with certainty, but it kind of makes sense.  When Nobel died, Norway was in a union with Sweden, and the Norwegian parliament was only responsible for internal matters.  It’s widely believed that Nobel felt that a committee chosen by the Norwegian government would be much less succeptible to outside pressures as opposed to a committee chosen by Sweden.  Oh, and Norwegians like to believe that Nobel thought they were less warlike than the Swedes, however true that may or may not be!

The edge of Oslo

Last week it was suggested that I travel to Frognerseteren, a location on the Northwestern edge of Oslo.  It is the last stop of Line 1 on the T-bane.  Where I live, there was a tiny bit of snow.  Up at Frognerseteren, well, take a look at the picture below. 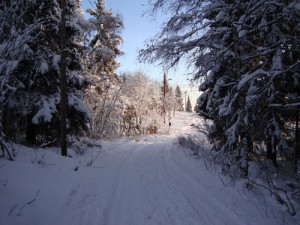 Frognerseteren Area Small.jpgFrognerseteren is a very popular area, especially during weekends when people go skiing and sleding.  There is even a ski lift!  Cross country skiing is also very popular in the area from what I saw while I was up there.  I need to go back as I only headed north of the station, but apparently there are some nicer views of the city a bit south of the station.

A word of advice, though, go early, and get on at a station in the middle of the station.  –I got on at Stortinget and there weren’t many seats left.  Lots of people with skis, though!  It’s about a 40 minute journey, but worth it.  Here’s one of the views I did find looking towards the city.

He said what now?

It’s been six months, and I finally decided it’s time to sign up for Norwegian classes.  So, starting January 6, I’ll be attending two classes a week for six weeks.  We’ll see how things go from there, but the school I’m going through, the Folkeuniversitetet, offers seven classes.  Norway requires 300 hours of classes (a combination of language and cultural classes, apparently) for people who will be applying for permanent residency or citizenship.  –I’m not planning on doing either of these, certainly not any time soon, but learning the language will be good no matter what.

I’ll try to post more information about the classes as I take them.  And maybe even start posting something in Norwegian on occasion.

For all the Americans who read this, I hope your Thanksgiving brought you lots of turkey, stuffing, mashed potatoes, and all the other trimmings.

So, the holiday season has begun, even in Norway.  So I’ll get to find out more about Norwegian holiday traditions like Pepperknøtter, which seem, more or less, to be gingersnaps, although the kind I tried didn’t quite have that nice spicy taste. 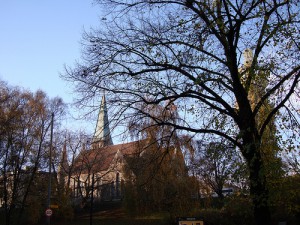 I took this picture on the 15th on a clear day – probably around 2pm, so there was still plenty of light.  I like the way the trees sort of hide the building, but you can still see the beauty of the church.  –I’m not a religious person, but even I can admit that a lot of effort tends to go into designing religious buildings.  I don’t really know anything about this church – it’s not like the well known one in the center of the city, of which I would post a picture, except that it’s been covered with plastic the entire time I’ve been here due to renovations or other repairs.

I’m struggling to decide if I want to talk about unions in Norway – I’ve learned a lot more about them due to contract discussions at work (that won’t get discussed here), and I find that I’m rather discomforted by them, but I need to decide if I can explain the matter well here.

Things you don’t find in Norway…

Still working on getting back to a normal posting schedule – ideally I’d like to have a new post up at least every 5 days, but for some reason I still seem to be having trouble doing that.

Anyway, I’ve been looking for some things that I just cannot find in Norway, or are hard to find.  I’ll add more to this list as I think of them.

Things that have been hard to find:

And finally, things that have been surprisingly easy to find:

Well, the election is over, and I’ve managed to pull myself away from Fallout 3 long enough for a quick post.

Back on October 29, Oslo had a snow day!  It really was quite beautiful, as you can see from the picture below.  Since then it’s ranged from quite warm to a bit chilly, but nothing too bad.  This morning was extremely wet, though.  I’m really hoping to see more snow later this winter (hopefully sooner rather than later).

From what I can tell – we’ll see if I still believe this in a couple of months – if you can survive a Chicago winter, you can survive winter in Oslo.  The biggest difference is the days are shorter over here. 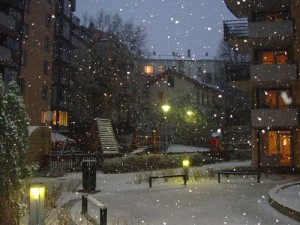 Ok, I’m going to try and disable anonymous comments for a while to see if that cuts down on the spam comments.  May the spammers spend eternity having to read and listen to their crap.  If there’s one constant online these days, it’s spam.

It’s not the greatest introduction to this post, but it will work.  After a good 3+ months in Oslo, life is taking on a modicum of normality.  Aside from everyone speaking a foreign language, life is pretty much the same as anywhere else.  –I go to work, I go to the gym, and all the other daily routines I would have anywhere else.

I am looking forward to winter, though.  After 5 years in areas with more moderate winters, I am actually eager to experience a cold season again.  Of course, we’ll see if I still think so in January!

I suppose it’s the normality that makes it a bit harder to actually compose the posts for this blog.  I need to buckle down and finish the posts I’ve started!