There is something of a tradition in the eastern part of Norway to travel to Sweden on occasion to buy stuff, especially alcohol and tobacco, where it is generally much cheaper.  From Oslo, it takes around 1 1/2 to 2 hours each way to get to a town in Sweden where you can get your shopping done.  I was invited to go with some people on Saturday, and it was amazing just how many people were out there getting their shopping done.  Obviously there are some limitations – on alcohol and tobacco at least, there are limits on how much you can bring back into Norway without having to pay customs – it’s around 2 liters of wine, 1 liter of spirits, and some amount of beer – I think 2 liters, but I’m not sure.

This trip is called a “Harrytur”, or at least it has been for the past few years – since around 2002 when a politician named Lars Sponheim said the practice was “Harry”.  “Harry” is a derogatory term that has been around since the beginning of the 20th century and suggests that something is low-class or in bad taste.  Still, the Harrytur is popular, especially when 100 Swedish Kroners are only worth around 80 Norwegian Kroners.

Of course, as an American, I looked at this as a road trip, another great tradition!

So, one of the many reasons I don’t post as much as I’d like to is I’m still taking Norwegian classes.  Level 2 has started, and I am learning quite a bit.  I think I will try to take level 3 before taking a break (3 hours of classes twice a week really does take it’s toll).

The hardest part of learning Norwegian is understand what people say.  I’m getting closer, though.  When listening to the radio or watching TV, I can make out many more words, although I often don’t have time to translate what is being said, even if I should know it.  Much of this now is getting to the point where I really know the words, to the point where I don’t have to translate everything that is being said. 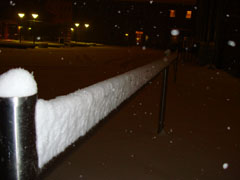 int I was wondering if winter would ever arrive in Oslo.  Well, it did!  The picture on the right was taken in January, and illustrates just how much snow was falling at times!  There were a couple of weekends that were more or less nonstop snow!

Much of the snow has melted, but there are still piles along many roads, and in some parts of town, the sidewalks aren’t completely clear yet.  In fact, there was more snow this weekend, but it did not really stick.  –I’m talking about in Oslo, near the center of the city.  The further out you get, the more snow there is.  It’s important to remember that the city is situated more or less in a bowl.  The center of the city is located on the Oslofjorden, and the rest of the city rises up around it.  This is also why you can reach ski locations in less than an hour on the trams.

I am more or less ready for spring to arrive, however.  Don’t get me wrong, I love snow, but after a while you get tired of the ice and puddles of water.  From what I hear, though, our current weather may continue for a while – maybe into April.  Whatever comes, I’m sure I’ll manage.