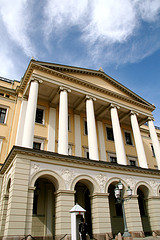 Norway has an interesting history.  For many years they were in a union with Denmark (not by choice), and then they were sort of given to Sweden in the early 19th century, which lasted until 1905.  It was during the union with Sweden that the Royal Palace was built.  It’s a small palace compared to others in Europe, because it wasn’t meant to be the primary residence of a royal family.

Today Norway’s king and queen live and do their work in the palace.  The crown prince also has offices here as well.  If you are going to be in Oslo in July or early August, you should consider taking the tour.  They give tours in English about three times a day during this time.  Buy your tickets in advance at the post office, otherwise they might sell out before you can get a ticket.

One downer is that they don’t let you take any pictures, and the palace’s website has all their pictures in flash files.  The tour takes you through the vestibule, the bird room, the “family” dining room, the ballroom, another dining hall, and the royal chapel, plus some other rooms.  A lot of it is very ornate, much as you’d expect of a palace, although the chapel is actually fairly plain.  It doesn’t necessarily show you how the king and queen live, but you get to see rooms that they use fairly often.