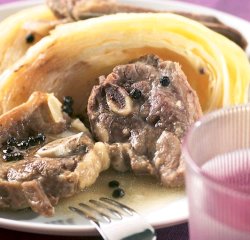 Last night I was invited to Sunday dinner to try fårikål, Norway’s national dish.  It is not something I would likely have tried on my own since you won’t find it in many restaurants.

Fårikål translates to ‘sheep in cabbage’, and is just that.  Sheep and cabbage stewed with whole black pepper for several hours and served with boiled potatoes.  It is traditionally served around this time of year, as this was the time of the year when they would slaughter young lambs.

I’m told it’s actually best on the third day, once the sheep, cabbage, and pepper flavors have had a chance to fully meld, but I found it to be pretty good even on the first day.

Would I make fårikål myself?  I’m not sure.  –Not because it isn’t good, but because I don’t think I could resist the urge to dress it up, even though it doesn’t really need it.  If nothing else, it does make make me want to cook up a big batch of stew, and I really am glad I got a chance to try it!