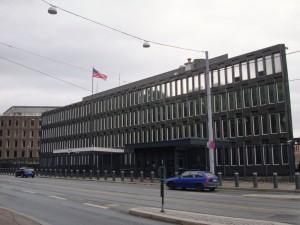 US Embassy in Oslo

The American Embassy is a very unique building, especially given it’s location.  As you can see by the picture, it’s very black, triangluar, and pretty much across the street from the palace.  And it has a tall, very ugly fence surrounding the place.  To say that it’s uninviting is an understatement.

Now, first off, I don’t have complaints about anyone working at the embassy.  The times I had to go there, none of them were ever rude to me, and they were took care of my request for more passport pages quickly.

However, I have to be honest and say that I’m not proud of the embassy.  I realize the current government feels the need to do a lot to “secure” the building, but I believe that they could secure the building without making it feel like you’re trying to enter a fortress.  Not only that, but they want to build a new embassy, way out of the center of the town, and at a location that the residents claim would destroy the last green area they have near them.  The embassy has upset Norwegians by trying to get the process expedited and attempting to circumvent the local government.

So, when I visited the embassy around 9am on a Thursday, I think, there was already a long line.  Luckily for me, they have a separate line for American citizens, and nobody was waiting there, so I only had to wait around 5-10 minutes.  You first go into this guardhouse, where you get searched more thoroughly then you do at the airport.  You can’t take much in with you – your ID and documents you need, and your cash.  Then you head to a side entrance and come into a pretty small, dingy area where there are one set of windows for Americans, and another set for everyone else.  Since there was only one American ahead of me, I didn’t have to wait there long.  I was able to drop my passport off and pick it up later in the day after they added the extra pages (of course, I had to go through security again, and it was just as much fun as before, although I left some stuff behind so I was able to get through faster.

My problem is that the embassy isn’t a place you want to go.  Although the people are polite, the environment doesn’t encourage you to make use of their services unless you have no other choice.  Back in the UK, some Australians loved to talk about how the Australian embassy in London have wine tastings and other events.

In case you’re wondering, the other embassies I’ve passed in Oslo tend to be more traditional looking buildings, and if they have a fence, it’s usually more ornamental.  Even the Israeli embassy doesn’t look like a fortress!

I can’t help but wonder what things were like, say, 10 years ago…